Every Friday night for most of the year, there is a big street fair-slash-farmers’ market in downtown Monrovia. I love to go–it reminds me of going to the fair. There are lots of booths with people selling jewelry and crafts, but I usually skip all that and head to the back where the food starts. I usually don’t buy anything to eat, but I love smelling the smoky barbecue and the funnel cakes and freshly roasted peanuts and–perhaps the most fair-conjuring scent–mini donuts. I don’t want to eat the donuts, I just want to smell them.

Right past the food is the farmers’ market. I try to go every week to pick up fresh vegetables and support local produce. It makes me feel like a good person. But to tell the truth, I don’t know what the heck to do at a farmers’ market.

First of all, the growers are standing two feet in front of me, watching me touch all their produce. Obviously, I am a rookie, timidly picking up a piece of squash and trying to figure out a) what it is, and b) if I want to eat it.

Lynne Rossetto-Kasper from NPR’s The Splendid Table radio cooking show tells me to be adventurous, get something new, be curious, ask questions. So upon seeing some small tomato-like things in husks on a table, I asked one of the ladies, “What are these?” “Tomatillos.” “What do you use them for?” “Salsa.” Hm. Do I want to make salsa? No. “Okay, thanks.”

Growers often put out samples of cut fruit, and I always try some. Who knows when you might stumble upon the most amazing fruit hybrid ever? But after taking samples, I feel weird just walking away. It’s like saying, “That’s right, I tried your fruit. It was good. But not THAT good.” I feel like a snob.

I also feel like a snob when I ask if the produce is organic. Actually, I’ve never come out to ask someone if it’s organic, because I’d feel like a snob doing that. “Excuse me, is this organic? Because I only eat organic produce.” Sometimes they will have signs like “not sprayed with pesticides.” Is that the same thing?

Last awkward thing–I went to an organic fruit stand, sampled a pluot, liked the pluot, and decided to buy some pluots. “I would like three, please.” “Three pounds?” “Uh, no… just three.” “Just three?” “Okay, maybe four? Like a pound? I dunno, just give me a pound I guess.” I felt like Charlie Bucket from Willy Wonka where Charlie’s teacher is discussing percentages. “Two? Two! I can’t do just two. So let’s say you did 200.”

I’m sure I’ll get the hang of this farmer’s market thing. So far, I feel like it’s overrated. But I still like going, if only to smell the mini donuts.

Here’s what I came home with tonight: 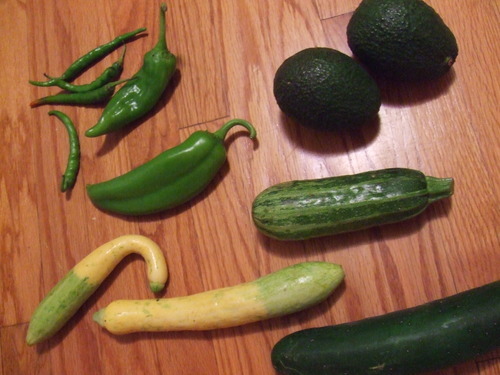 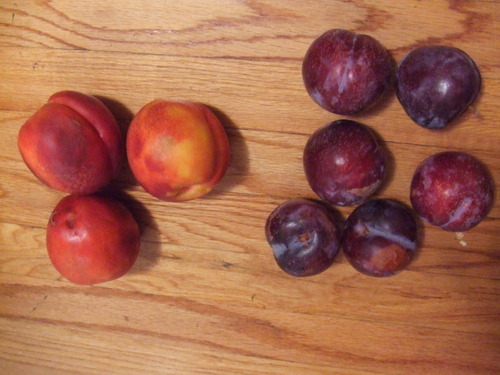 I also got some nectarines and the aforementioned pound of pluots. Incidentally, when I told the dude what I wanted, he started picking them out and he said, “Do you want good ones?” “Nah, I want bad ones.” I smiled. “Just kidding.” I think he didn’t appreciate my sarcasm, because he didn’t do a great job picking my nectarines. On the other hand, he seemed like he was a kid on summer break who got pulled into helping out at the family fruit stand, so maybe he’s just a rookie like me.

I also brought this home: 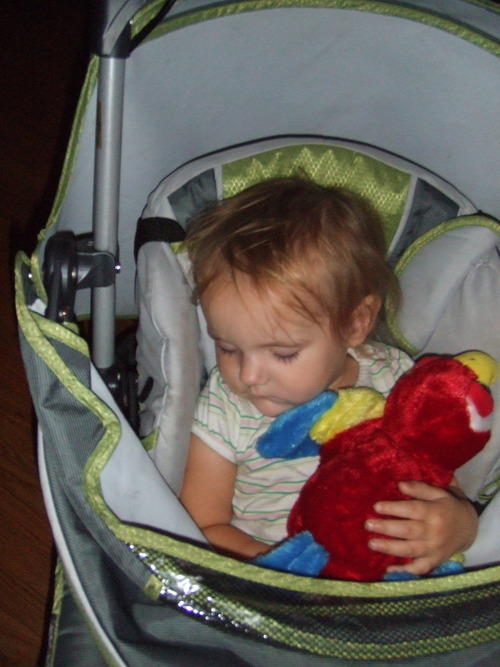 She fell asleep literally five seconds before we walked in the door. And she’s been sleeping ever since… I should probably put her in bed.